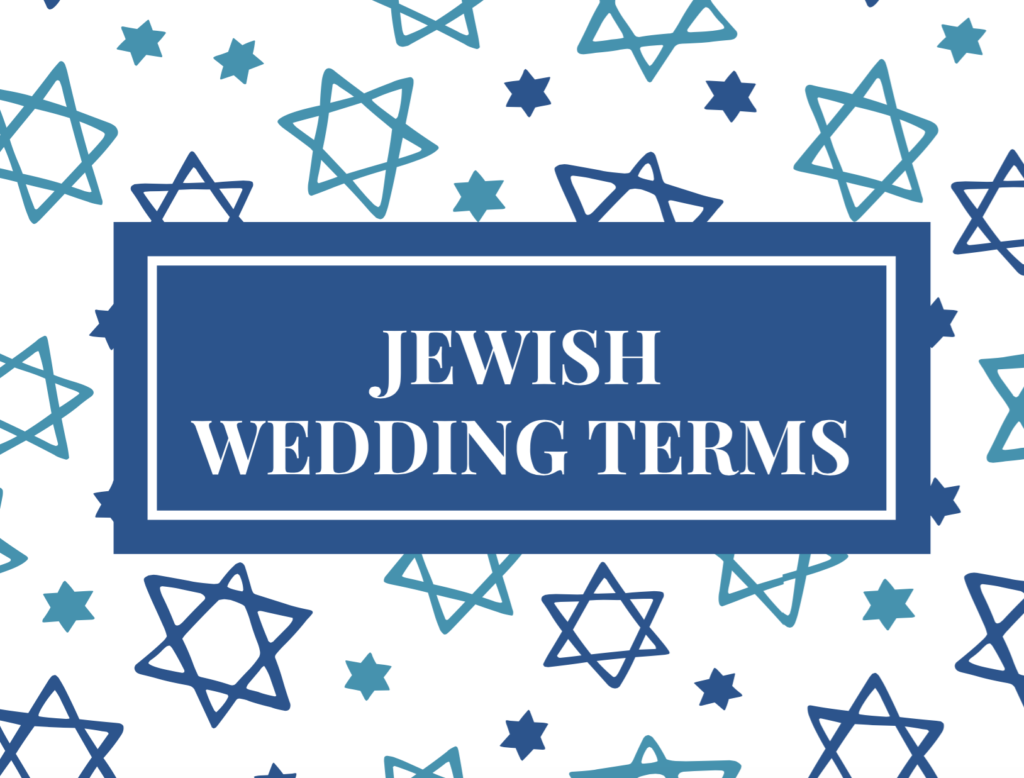 Growing up Catholic I had a lot to learn about Jewish weddings when I started Party Girl Events. I quickly realized there are so many differences! Now About 25% of my Vail weddings are Jewish, and in partnership with B’nai Vail, I offer specific Jewish wedding services.

I put together this glossary of Jewish wedding terms to share with Sabrina, my new marketing & event coordinator, and I realized it would be helpful for anyone planning a Jewish wedding, not just professional wedding planners…..

The Ketuba- A jewish marriage contract signed before the ceremony, and read by The Rabbi during the ceremony. The couple can choose the design, and personalize the english part of the text. Sometimes they are framed, and they are nice to display at the reception because they’re usually pretty cool.

Kippot or Yarmulkes- The skullcaps worn by men. Don’t forget to include clips or bobby pins.

Kiddish Cup- The cup or cups used during the ceremony for drinking wine. Usually they are symbolic, like a family members, or the same cups used in their bar mitzvah, or a wedding gift…. Or not, I always bring one just in case.

Tallit- The prayer shawl that is wrapped around the couple during the ceremony. Sometimes it’s used for the chuppah top. It looks really pretty in photos, so make sure the photographer gets the shot!

The Breaking Glass- Couples break the glass at the end of the ceremony and everyone yells “Mazel Tov!”

Aufruf- This happens at Friday night services. It’s a way to honor the couple. they are called up to give a blessing over The Torah.

Tish- Not sure how common this is, but I’ve seen it done once. The men have a reception before the ceremony. The groom reads from the torah, and the guys interrupt him rudely with funny comments.The women are in another room, and the bride, her mother, and the grooms mother sit in fancy chairs, like the queen’s thrones. The ladies dance around them while the bride and the moms laugh their  faces  off. I’m not sure what the women’s reception is called honestly……

Bedecken- After the Tish, before the ketuba signing…. It’s the veiling ceremony. The ceremony is based on the biblical story in which Jacob was tricked into marrying Leah when he was supposed to marry Rachel.

Ketuba Signing- Done before the ceremony in front of 2 Jewish male witnesses, and the bridal party and family.

Sheva Brachot (Seven blessings)– Either sung by the Rabbi, or Cantor. This is a must for all Jewish Weddings.

Yichud- If someone asks for this they are requesting a few minutes alone after the ceremony. Traditionally  the couple used to consummate the marriage at this time(so awkward), but not anymore.

Since 2015 Party Girl Events has been helping awesome clients plan and execute weddings and events that are smooth flowing and memorable. We've been everywhere from mountain tops to farms, from back yards to swanky ballrooms. We've worked through crazy snowstorms, fixed ripped bridesmaid's dresses, air brushed a sunburnt groom's forehead, and re-stacked wedding cakes on the fly. We love planning all events. It doesn’t matter how big or small, what the budget is, or how out of the box the vision. As long as you’re excited about it, then we'd love to be a part of it!
This error message is only visible to WordPress admins


Error: API requests are being delayed for this account. New posts will not be retrieved.

Make sure this account has posts available on instagram.com.

Error: admin-ajax.php test was not successful. Some features may not be available.

Please visit this page to troubleshoot.